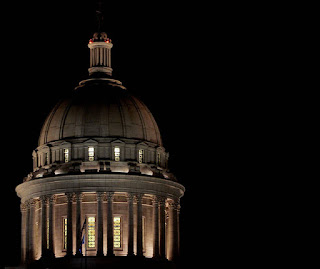 Authored by by Jamison Faught
MuskogeePolitico.com

Here's a thought: rather than revoking licenses for those performing what would still be a legal procedure, how about we take up Senate Bill 13, ban the procedure itself and do away with this need to revoke licenses?

Ending abortion will require a fight. The method to bring about the fight needs to be worth the fight. If we're going to go through with it, why stop halfway when we can go all the way?

In the Old Testament book of Second Kings, Joash, king of Israel, comes to see Elisha while the great prophet is on his deathbed. Here's how the meeting is recorded:


Now Elisha was fallen sick of his sickness whereof he died. And Joash the king of Israel came down unto him, and wept over his face, and said, O my father, my father, the chariot of Israel, and the horsemen thereof. And Elisha said unto him, Take bow and arrows. And he took unto him bow and arrows.

And he said, Take the arrows. And he took them. And he said unto the king of Israel, Smite upon the ground. And he smote thrice, and stayed. And the man of God was wroth with him, and said, Thou shouldest have smitten five or six times; then hadst thou smitten Syria till thou hadst consumed it: whereas now thou shalt smite Syria but thrice. (2 Kings 13:14-19)

King Joash was given the tools of deliverance, and stopped short with a half-hearted effort. Elisha rebuked him for failing to do what was needed. Joash went on to defeat the Syrians three times, and failing to utterly destroy an enemy that would oppress Israel in the very near future.

This bill sounds good on the surface. 71 state representatives ostensibly made a statement in support of ending abortion. The problem is this bill is not the vehicle by which that goal will be accomplished.